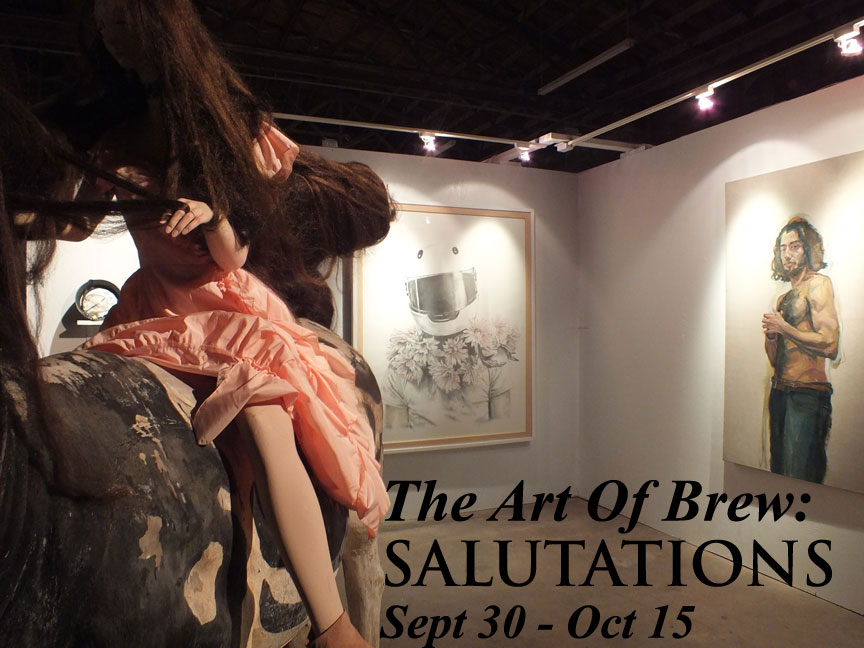 “The Art of Brew: Salutations” art exhibition opened September 30, 2011 as part of a fundraiser event and auction in benefit of the Young At Art Museum opening spring 2012 in Davie. The show will run open to the public Tuesday through Saturday from 2 PM – 8 PM, until its closing reception on Saturday October 15, 2011 as part of “Art Fallout: A Day for Contemporary Art in Downtown Fort Lauderdale”, at The Project Space in F.A.T. …Village (519 NW 1st Ave) 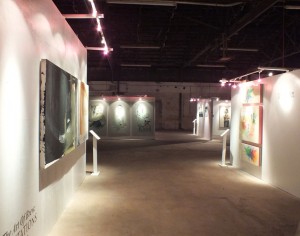 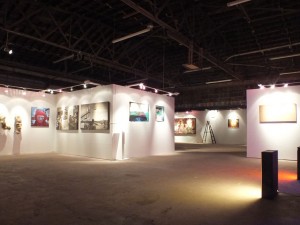 In a particularly ambitious installation, members of the Bedlam Lorenz Assembly non-profit utilized the two-weeks prior to the event’s opening to transform the 10,000 sq ft industrial warehouse space into a pop-up art show reminiscent of an art fair off-shoot from Miami Beach’s Art Basel. The team, headed by BLA Founder and Principal Organizer Zack Spechler and Project Manager Anthony DelGreco with the help of Derek Shambora and Anthony Barrineau of event-sponsor Eco Simplista, constructed a floor plan of walls and through a sponsorship by Brilliance Lighting Solutions had track-spotlights installed. The process altogether can be seen, as documented, in artist Andrea Trejo’s photo-essay montage video installation “Procession”.

The group show plays host to a broad range of some of South Florida’s most significant contemporary emerging and established artists. Jillian Mayer of David Castillo Gallery in Wynwood, fresh off the heels of being awarded the 2011 South Florida Cultural Consortium and the cover page of Art Papers magazine’s September publication, premiered her new interactive light box installation “Applause Box”. Prolific painter and definitive icon of South Florida’s muralist tradition, Francesco Lo Castro, shows both a triptych of large portraits and the last remaining triptych from his multimedia painting through layered resin on wood series.

Also prominently featured are Fort Lauderdale artist and gallerist figures, Leah Brown and Peter Symons. Brown’s latest work, “Harnessing”, a life-scale sculpture, depicts a weary female figure in a pink dress with matching suede boots riding on top of a headless cow while entangled in a conical arch of hair extended from both ends of the weathered ungulate. In the booth surrounding the sculpture is, Mexico City-born and Miami-based artist, Josafat Miranda’s large-scale work on paper “Il Ribelle Senza Flori”, a graphite, ink and oil composite portrait adorned with a motorcycle helmet and a wreath of pink gerber daisies around its shoulders. Other highlight works include Ali Spechler’s beautifully painted oil on linen portraits of culturally secular Jews in conflicted contexts; new compositions of biomorphic accumulation from Adrienne Chadwick’s “Organism Series”; an 11′ panoramic spray paint on canvas abstraction in a blue-green color palette by another prolific South Florida muralist, Douglas Hoekzema, mirroring his mural testimonial to can-control on the building’s exterior; an expansive painting by Purvis Young from his estate; and two 10′ x 16′ murals, one in a gold frame painted entirely through an interactive performance by exploded water balloons of “Manzoni’s artist blood” and the other a black and white spray painting titled “A Brief Summary Of The History Of Graffiti”, created by the show’s curator and Art Director of the Bedlam Lorenz Assembly, Rory Carracino. 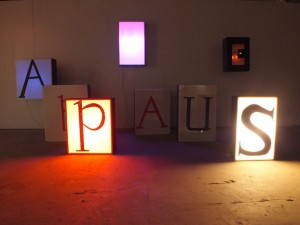 In the auction portion of the exhibit, which closed for bidding on September 30, 2011 is a scaled-down highlight reel of donated works from many of the artists who are a part of the new Young At Art Museum’s permanent collection and other participants from the event’s exhibition. Stand-outs include a C print photograph by honored and decorated photographer, and founder of Girls’ Club, Francie Bishop Good of David Castillo Gallery; the film “She Sank On Shallow Bank” with handmade packaging by Hilger Artist Project Award recipient Clifton Childree of Miami’s Dorsch Gallery; a studio drawing by Pablo Cano illustrating a narrative from his celebrated marionette performance “The Beginning”; and a print with her signature “Very Good” text-tag line by consummate art professional and creative director of Girls’ Club, Michelle Weinberg.

A preview of the event installation in progress with a live interactive performance will be open to the public 7-11 pm, Saturday, September 24, 2011, in conjunction with September’s Art Walk, followed by an after-party at Green Room, in Downtown Fort Lauderdale, promoting the main event with discounted ticket prices.

The Art of Brew’s art exhibition will re-open on October 15, 2011 at 6 pm in conjunction with downtown Fort Lauderdale’s Art Fallout contemporary art showcase.

Admission: Free & Open to the Public

This group exhibition on 3 floors will make you smile and prove to be one of the Best of the season! HUMORATORIUM is a spectacle of the best and most innovative contemporary art that incorporates wit, humor, irony, or playfulness in process, materials, or subject matter. Featuring the amusing creations of 34 artists, from inflatable Installation art to painting and animation, this exhibition will be a visual treat!

ART FALLOUT is a collaboration between Girls Club Art Collection, 1310 Gallery, 18 Rabbit Gallery, The Museum of Art Fort Lauderdale and other local venues. There will be a shuttle bus rotating between each of these locations. Multiple venues will host their own new art exhibitions and events on the same night. To make the evening all the more entertaining, there will be a scavenger hunt, with items to locate at each venue.

These artists embrace creation through playful materials or processes and use humor to enlighten cultural discussion. on view for only two weeks.

Edible art by Wendy Doscher-Smith and free beverages by Magners Original Irish Cider and Bawls Energy drink. The exhibition is supported in part by a grant from The Broward Cultural Division and National Endowment for the Arts. 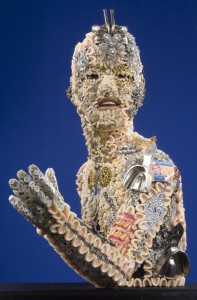 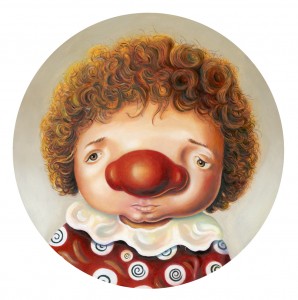 Join us for the closing night. 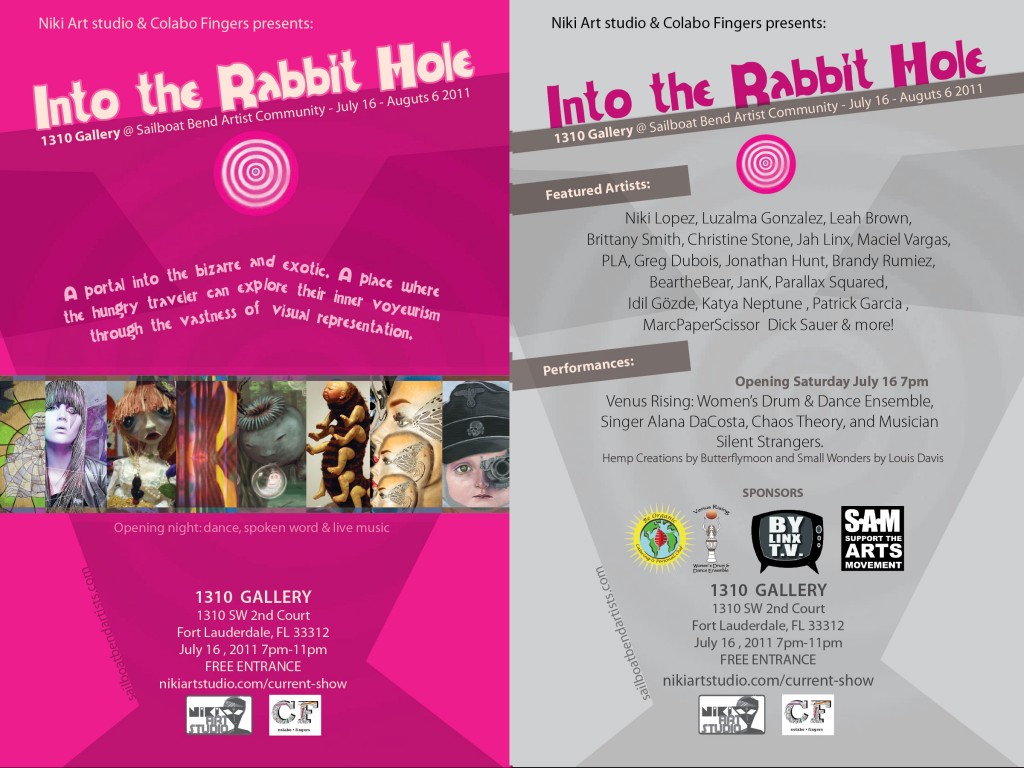 Into The Rabbit Hole, a portal into the bizarre and exotic. A place where the hungry traveler can explore their inner voyeurism through the vastness of visual representation.

Come discover an alternate world through visual and performance arts at 1310 Gallery. It will be a feast for the eyes. Brought to you by the whimsical minds behind Niki Art Studio and Colabo Fingers.

Lisa Rockford & 1310 Gallery present a one week exhibition on three floors with Innovative works by Regional Artists, ranging from Drawing to Fiber art to Sound and Installation art. Lisa Rockford set a precedent for curatorial flair with her the Myth of Power exhibition at 1310 Gallery for ART FALLOUT 2010, which drew over 500 attendees to the opening.

ADD JUNCTURE
Can Florida College Adjuncts practice what they preach? ADD JUNCTURE answers that question with a sampling of the range of talent found in Florida academia. Two Floors are dedicated to this juried group exhibition of 17 Artists. These individuals live a double life: Making a living as Part-time art Professors at Florida Colleges or Universities, and simultaneously dedicated to their Professional art careers, creating and exhibiting in National museum and Gallery shows.

The exhibition highlights works by Leslie Elsasser of University of South Florida, that were created with a Fulbright to India where she learned from Lemogul miniaturists, working with two classical Indian painters who had lineage back to the mogul royal painting workshops.

and Gorgeta Fondos, who immigrated to the US in 2003 after receiving an arts education in Fine Arts with specialization in Fiber Arts at schools in Moldova, Romania, and Greece. Using the flame as a tool, Georgeta experiments with singeing and scorching various textiles. The matchstick’s flame is being directed to “draw”, “paint”, and “sculpt” elegant three-dimensional forms that evoke ideas of change, transformation, destruction, and loss. Metaphorically, at the level of human condition, she sees burning as a force that produces emotional excitement and agitation, but also discomfort, pain, and suffering.

Other artists in the exhibition include:

NANNETTE CHERRY (see image)
The First Floor is dedicated to a Solo Exhibition of New Works by Nannette Cherry.
The portrait has been a common element in the art of Nannette Cherry over the years. Borrowing from the work of the Old Masters, while adding a Surrealist touch, Cherry employs digital manipulation before committing the imagery to canvas or paper. The distortions, which trademark these portraits, speak to the idea that our perceptions and memories can easily be skewed, just as the presented image is. The series includes both oil paintings and soft pastel drawings, frequently presented in atypical color schemes that suggest psychedelic art influences, as well as nod to the notion that our perceptions are variable and often unpredictable.

Nannette resides in Orlando, Florida. Her work has been shown throughout Florida, New York and Chicago.

“Strangers are exciting, their mystery never ends.
But, there’s nothing like looking at your own history in the faces of your friends.”—Ani DiFranco

This engaging, innovative and fun look at the impact of the sideways lives of artists and performers shows you the real effect of culture in the world. What remnants of yourself do you leave in others?

Featuring Performances by Don (mrfiddle) Hicks and The Adna Project
Flamenco performance by Miguelangel Diez and his Flamenco Tribe
With a leading-edge interactive installation by sound artist Angelo Caruso.

*Also featuring: A presentation by Big Brothers and Big Sisters of Broward.*

Events during the month
May 21: Opening reception with performances and interactive art
May 26: Reception for the Broward County Historic Commission
June 18: Open House